"Holy Conversation" does sound like an exceptionally pious name, even for a parish blog. And we can't guarantee that everything here will meet the high standard the name implies. But the phrase comes from the story of our patron saint, and we think it fits. Here's why.

St. Scholastica was a sixth-century abbess who, according to the Dialogues of Pope Gregory I, used to meet once a year with her brother, St. Benedict. On the last occasion they were together, they spent their time "satisfying each other's hunger for holy conversation about the spiritual life."

We hope that this blog can become a place where the members of our parish can find a taste of the companionship and conversation that Scholastica and Benedict enjoyed so much. Welcome!

A great deal is being written and said concerning the sexual abuse crisis in the Catholic Church, including my previous post here.

Here are a few additional resources that I have found helpful.

First, listening to some reports, or even reading the grand jury report quickly, you can get the impression that the sexual abuse of children is still occurring at a high rate within the Church.  While of course, no level of incidence of such actions can be considered acceptable, most of the incidents we are hearing about now did occur years ago.

Two charts, published by America (the magazine of the Jesuits in the U.S.) show this.

The first shows that, on average, offenders mentioned in the grand jury report were born in 1933 and ordained in 1961. 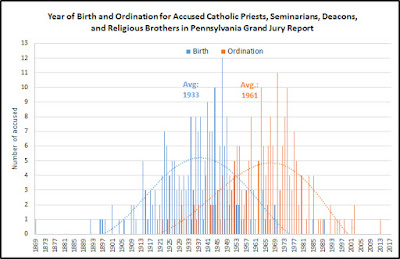 The second shows that documented incidents of abuse peaked in the 1970s and have decreased greatly since. 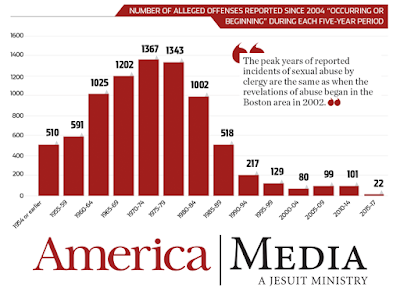 You can find these charts in context here.

I do not underline these facts to minimize the horror of what happened.  It is important that we remain vigilant in pursuing the policies that have protected our children better since the adoption of The Charter for the Protection of Children and Young People in 2002.  But it is also important to recognize that there is not a wave of new abuse occurring now.  What we are facing now is the scope of the failure of Church authorities to protect children in the past, and particularly, how to deal with failures on the part of bishops.

In spite of its too-flippant title, this piece by Michael Cook of Mercator.net sounds some cautionary notes that—for all of our anger—are good to hear.

Still, the situation does call for systemic reform.  This piece by Russell Pollitt, SJ (director of the Jesuit Institute of South Africa) is the best short analysis I have seen of some of the systemic issues that we must deal with.

At the end of his piece, Fr. Pollitt cautions against scapegoating gay priests.  Some commentators, including Bishop Robert Morlino of Madison, Wisconsin, indeed focus here on what he refers to as a “homosexual subculture within the hierarchy of the Catholic Church” and on a pattern of sin that he relates decisively to homosexuality.  On the other hand, James Martin, SJ, a defender of the place of LGBT Catholics within the Church, has written strongly here against any campaign to seek out and remove gay priests.

Are there resources that you have found helpful in understanding the mess we are in or pointing toward some ways forward?  Please send them to me here, or include them in a comment to this post.  I moderate the comments, so it will not appear immediately.  Also, I welcome any other comments you may have.
Posted by Andrew Bechman at 10:32 PM

Thanks for commenting on a post at the St. Scholastica parish blog!
Comments are moderated, so you won't see yours immediately, but it should be up soon.